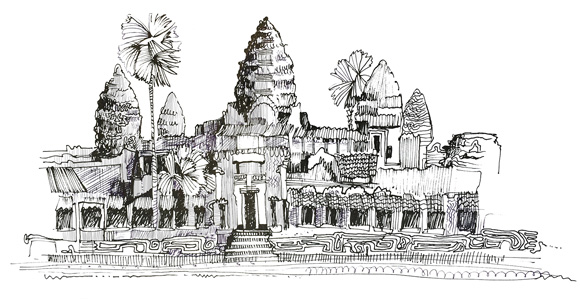 Cambodia is a developing country, which is characterised by an agriculture-oriented economy. The general resources are rice, sugar cane, bananas, corn, silk-cotton tree etc. Approximately ¾ of the territory is covered by forests. Large parts of the forest areas are poorly exploited because of the lack of transport in remote mountainous areas. While the contribution of agriculture to Cambodia's GDP is decreasing (from almost 50% in 1995 to 28% in 2015), it is still higher than in other ASEAN countries. Industry contribution to GDP has risen from 15% in 1995 to 30% in 2015, a level similar to Lao PDR's, but lower than Thailand's (37%). The majority of Cambodia's industry is engaged in processing of agricultural products, fish and timber, production of rubber as well as textiles (World Bank 2016).

The gross domestic product (GDP) per capita (both in terms of current prices and purchasing power parity) is the lowest in ASEAN. However, GDP growth has been impressive with average annual growth rates of over 8% between 2000 and 2010 and more than 7% since 2011 (World Bank 2016). This makes Cambodia the fastest growing economy in ASEAN since 2000. Intermittently, there was practically no growth (0.1%) in the financial crisis year 2009. Together with Thailand, Cambodia was among the most affected countries in the region. The main sources of Cambodia's generally strong economic growth were tourism on the one hand, the garment and agriculture sector on the other.

With a labor force of more than 8 million people, occupation by sector is mainly concentrated on agriculture (67% of workforce in 2012, 54% of total employment in 2010) and services (30% of total employment in 2010) (FAO 2014; ILO 2016a). The last available data (2015) shows that the unemployment rate was extremely low with 0.3% (ILO 2016b). Many of the workers, however, are in vulnerable employment (ILO 2012). Inflation is reasonably low in Cambodia. In 2015, the inflation rate was at 1.2% (compared to 4% in 2014). Consequently, Cambodia has prospects for long-term economic development with the help of strong policy regulation, development strategies and plans (Asian Development Outlook 2016). However, according to the Corruption Perceptions Index 2015, Cambodia takes the 150th position out of 167 – this fact might create obstacles for further economical development and foreign direct investment. According to the Doing Business Index 2015 the country takes the 127th place out of 189. This points to another area where challenges lie ahead.

Cambodia is still building its science, technology and innovation (STI) policy. There is no science and innovation ministry at the moment. The Ministries of Industry, Mining and Energy as well as of Education, Youth and Sport take care of parts of the agenda. The formulation of a science and technology policy has been under way in 2014 and is guided by the Supreme National Economic Council (JST 2014).

Cambodia has several national development plans, which aim to support country-wide reforms (judicial, administration, army forces), to establish a sustainable economic development, to reduce poverty and to fight corruption. For instance, the National Strategic Development Plan (NSDP) was initiated by the government in 2006 and focused on building-up an agricultural sector, establishing a favorable environment for foreign direct investments, and on business and human resources development. However, the plan does not include a concept for the development of a national innovation system. The general bodies, which may be related to STI policy and performance in Cambodia, are the above-mentioned Ministries, the Institute of Technology of Cambodia (ITC) and the Royal University of Phnom Penh. The Education Ministry is in charge of ITC and the universities (there are more than 90 institutions of tertiary education in Cambodia). ITC is a national university, which conducts research in diverse areas: civil engineering, agriculture, waste control, climate change, etc. The Royal University of Phnom Penh is the largest university in Cambodia with about 18,000 students in total and with diverse faculties (it is the only university in Cambodia which offers fundamental science courses) (Overseas Research Report, 2015). ITC and the Royal University of Phnom Penh are the only major research performing institutions in the country with a visible publication output. The situation is of course partly due to the low public and private investments in R&D (estimated at 0.05% of GDP, OECD 2013 / JST 2014)

Overall, in Cambodia there is a lack of national policies and institutional support for S&T development. The country needs a governmental strategy for promoting science, technology and education at all levels and developing small and medium enterprisers in order to ensure sustainable S&T development, infrastructure and investment attractiveness for foreign investors.

With regard to global rankings of competitiveness, Cambodia presented an almost constant position during the last five years. The country moved from 97th position out of 142th in 2011 to 90th out of 140th in 2015. Overall, Cambodia considerably improved in indicators for macroeconomic environment (from 107th position to 64th position) and for health and primary education (from 111th to 87th). On the other hand, the country’s performance worsened related to its indicators in institutions (from 79th to 111th) and overall innovation factors (business sophistication from 90th to 122th and innovation from 85th to 122th).

In the Global Innovation Index, Cambodia improved over the past five years, ranking 111th (out of 142) in 2011 and 91th in 2015 (out of 141). During this period, the Index shows an improvement in indicators on market sophistication and knowledge & technology outputs show. At the same time, the authors report a worsening situation in terms of infrastructure. Among the other indicators, Cambodia shows quite stable positions.

Concerning R&D indicators in Cambodia, the available data is limited. The two tables below provide the most up-to-date information about population, GDP, foreign direct investments, number of publications and number of patent applications with domestic inventors. As depicted in the tables, GDP increased significantly in the last five years with average annual growth of 7.2% (what is high even compared to other ASEAN countries, which have annual growth rates of approximately 4-5%). The latest available data for Gross expenditures on R&D (GERD) in Cambodia dates back to 2002 with about US$6,820.00 (accounting for 0.05% of GDP in 2002) and reveals an extremely small room for manoeuvre for S&T development. Data on the number of researchers also dates back to 2002 when the number was stated with 800 people overall. Cambodia-based authors have few publications in indexed journals and limited patent output. Cambodia is working on these issues, however, as can be seen, for instance, from the cooperation agreement on patent application processing between Cambodia and Singapore.