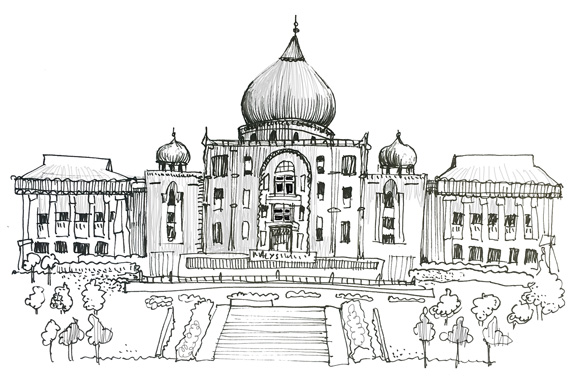 Through transition from a strong reliance on commodities, via export-led manufacturing and Foreign Direct Investment (FDI), to the current emphasis on knowledge and Science, Technology and Innovation (STI), Malaysia now ranks 12th in the International Institute for Management Development (IMD) World Competitiveness Ranking (2014), and 20th in the Global Competitiveness Report 2014-2015 conducted by the World Economic Forum.

The state has played a significant, although recently declining, role in transforming Malaysia into a middle-income country. The Government guides economic activity in Malaysia through macroeconomic five-year plans, which have long emphasised the importance of promoting a knowledge economy and innovation. In the most recent plan, 2011-2015, particularly strong emphasis is placed on commercialisation of R&D results and knowledge transfer from academia to industry, attracting multinational companies by building capacity in S&T, and supporting homegrown businesses to be competitive in local and global markets. This encloses the development of human capital of the highest quality as a means for turning Malaysia into a developed country (Summary of the 10th Malaysia Plan).

However, these achievements are still below that of advanced economies and also many emerging economies (Malaysian STI Indicators report 2013). In addition, some weaknesses of the National Innovation System (NIS) have remained, including inadequate supplies of skilled labour, stagnant R&D and innovative capacity, low levels of entrepreneurship and venture capital, and a poor track record in turning political visions into coherent policies and effective programmes (OECD 2013).

Science and technology have been a featured part of Malaysia’s economic planning since 1986 when the First National Science and Technology Policy (NSTP) was launched as a distinctive strand in the 5th Malaysia Plan (1986–90) (OECD 2013). Since the implementation of the first NSTP, Malaysia has prioritized S&T as key to achieve economic growth, sustainable wealth, higher employment and improved well-being of the country.

In 1991, Malaysia developed a vision 2020, a blueprint for turning Malaysia into a knowledge economy and a self-sufficient industrialized country by 2020. Within this vision, the government drafted a framework comprising four pillars to drive changes. One of these pillars was the Tenth Malaysia Plan (2011-15), an economically focused strategic plan, which highlights the importance of promoting a knowledge economy and innovation to achieve its economic goals. The plan places a strong emphasis on commercialisation of R&D results and knowledge transfer from academia to industry, attracting multinational companies by building capacity in S&T, and supporting home-grown businesses to be competitive in local and global markets. In line with this goal, it announced a new structure to streamline the governance of science and technology, with a more prominent role for the Prime Minister’s Office. A Special Innovation Unit (UNIK) under the Prime Minister’s Office, was created to oversee an integrated innovation policy and entrusted with commercialising research findings from public research institutions and universities. UNIK is also responsible for drafting the National Innovation Policy, while a statutory organisation, the Malaysian Innovation Agency (AIM), was established in 2011 to drive the nation’s innovation agenda (OECD 2013). Besides the commercialisation aspects to innovation, the plan also emphasises the development of key sectors in tackling identified major obstacles, including falling private investment and productivity rates, inefficient use of resources, outflow of talent, lack of skilled labour, heavy bureaucracy and out-of-date action plans.

Despite the clear political commitment on supporting STI, the Malaysian NIS has been characterised as suffering from weak implementation of policies and strategies, insufficient collaboration between public and private sectors STI players and with foreign partners as well as low R&D capacity of Malaysian businesses. To address these and other challenges and to turn Malaysia into an innovation- and knowledge-based industrial nation, MOSTI launched the second STI policy framework for the period 2013-2020, known as the “National Policy for Science, Technology and Innovation (NPSTI)”.  The NPSTI cuts across all sectors of the economy with the aim to strengthen and mainstream STI in all sectors and levels of national socio-economic development, enhance commercialisation and increase uptake of home grown R&D innovative products, to maintain a beneficial R&D expenditure ratio between the private and public sectors, and to initiate an extensive review of fiscal and financial incentives to promote industry innovation, particularly among SMEs. In addition, there is a keen interest in enhancing international collaborations, and to intensify domestic and international networks for research collaboration, strategic partnerships and business relationships.

The targets for higher education policy are set in the National Higher Education Strategic Plan (NHESP - 2007-2020) launched by MOE. The objective is to increase total enrolment in public higher education institutes. By 2020, it is planned that 50% of the population of cohort 18-23 years old will have access to tertiary education and 33% of the workforce will have tertiary qualifications.

In addition to these overarching strategies, Malaysia has aimed to advance its level of innovation through sector specific strategies, such as the Multimedia Super Corridor in the ICT sector, Digital Malaysia initiative (2011), and the National Biomass Strategy. The country is also starting to focus on social innovation as an important element in an innovation system whose performance is bound to benefit the entire society.

The key actors in Malaysia’s National Innovation System include: ministries and government agencies; R&D sector organizations such as universities, government research institutes (GRIs), and research companies; innovation support centres; institutions in the financing sector; education and training institutions; and commercial enterprises. The links between actors and their contribution to the generation of knowledge are illustrated below: 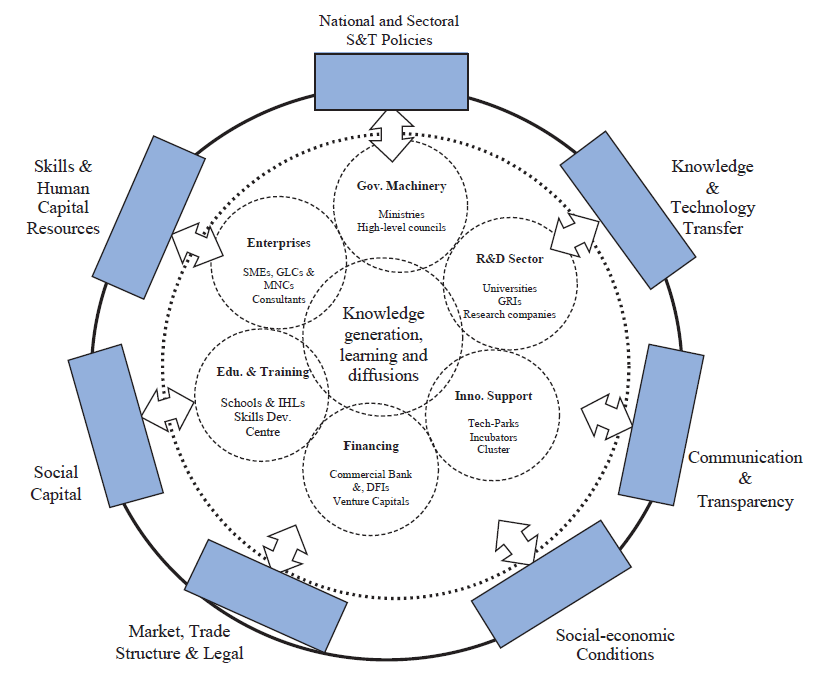 The Ministry of Science, Technology and Innovation (MOSTI) carries the responsibility for STI policy design and coordination in Malaysia. It also supervises over 20 departments and agencies that are essential in defining Malaysia’s scientific landscape, especially in the five key areas of biotechnology, ICT, industrial technology, sea to space, and science and technology core services. Moreover, MOSTI is an important funding body for STI, alongside the Ministry of Education and the Malaysian Technology Development Corporation (MTDC), and it provides grants, including: pre-seed grants, Research, Development and Commercialisation (R&D&C) grants, commercialisation grants, and grants for applied research through specialised schemes. In addition, MOSTI oversees and acts as a coordinator for STI related instruments in Malaysia (Medina/Zhang/MOSTI 2014; OECD 2013).

Decisions on the allocation of the S&T budget, the integration of S&T plans with national development planning and the determination of manpower requirements to execute these plans rest with the Treasury, the Economic Planning Unit, and the Public Services Department, respectively (ibid.).

A number of sectoral ministries and government agencies reporting to them have a role in S&T development. These include the Ministry of Education, the Malaysian Innovation Agency (AIM) as well as the Malaysian Agricultural Research and Development Institute (MARDI) and the Malaysian Palm Oil Board (MPOB), which report to the Ministry of Agriculture and the Ministry of Plantation Industries, respectively. In addition, technology transfer is under the Ministry of International Trade and Industry, while fiscal and financial incentives for R&D are administered by the Ministry of Finance. The Ministry of Finance also oversees SIRIM, a state owned corporation, aiming at providing solutions to the industry, helping them to compete better through every step of the business value chain. Similarly MIMOS, the national R&D centre for ICT in Malaysia operating under purview of MOSTI, helps companies to become more competitive and enter faster in to the markets. MIMOS' applied research efforts focus on developing technology platforms upon which local industries can build products as technology platforms reduce the “technology risk”.

The business sector has consistently been the largest performer of R&D in Malaysia (Malaysian STI Indicators report 2013). In 2011, the private sector accounted for 56.7% of GERD, although this represents a proportional decrease since the high point in 2006; while the public sector, namely government agencies & research institutes (GRI) and institutions of higher learning (IHLs) contributed 14.4% and 28.9% respectively.  Second to the business sector in R&D spending was the higher education sector, consisting of both public and private institutions of higher learning, whose expenditure has increased over the years, recording approximately 29% of the GERD in 2010 and 2011 (Malaysian STI Indicators report 2013). In 2011, the investments were highest in ICT research (38.3% of GERD) and Engineering and Technology (24.2% of GERD) (MASTIC 2012).