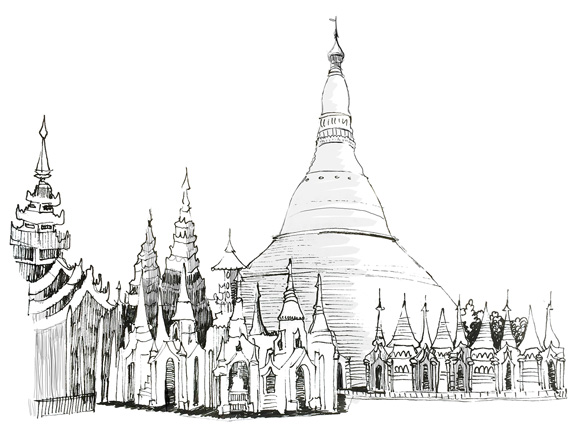 Myanmar is known for its exceptionally rich biodiversity, its wealth of resources – mainly petroleum gas, wood, copper, gemstones – and its strategic location between India, China and the other countries in mainland Southeast Asia. Compared to the developing countries in its neighbourhood, Myanmar is still characterised by a large agricultural sector that produces almost a 1/3 of the value added in the national economy. In 2014, the share of agriculture in % of the overall Myanmar GVA (Gross Value Added – the value of all produced goods and services in the economy) was 27.9% (down from 47% in 2005). The share of industry of the GVA in 2014 was 34.5%, whereas the share of services and other activities (includes gas and water) was 37.7%, based on UN data.

Generally, the national economy is suffering under an unusually high inflation rate, energy shortages and bad harvests. Due to the growing, but still small scale of inclusion of its economy in global value chains and production networks, the country was less affected by the actual financial crisis than other Southeast Asian countries. After the financial crisis and over the past six years, the Myanmar economy had its ups and downs – whereas in 2012 the national GDP still amounted to around 74bn US$, it dropped to 58bn US$ in 2013 before rising to 64bn US$ again in 2014 and 2015 (UNESCO 2016, World Bank 2016).

In 1994, the Myanmar government adopted a science and technology law. Based on this law, national science and technology policy is developed by a Committee on Science and Technology, which is chaired by the Prime Minister. The Ministry of Science and Technology is implementing this plans and is responsible for higher education and for technological research and development. It is integrating six different departments and supervises a total of some 99 different institutions. However,  a (new) basic policy for science and technology was in preparation as of the fall of 2014, subsequent to the law in 1994. Likewise, an intellectual property law is currently being developed and other innovation framework condition related initiatives are undertaken.

The following are priority areas of S&T identified in National Economic Development Plans and in accordance with the S&T law under preparation in 2014 (JST 2014, 188):

・Source and other materials

・Water quality preservation, and development of the water supply and sewage systems

According to the high importance of agriculture for the national development, agricultural research is dominating the Myanmar S&T infrastructure. It includes the development of agricultural products and methods as well as sustainable forestry. Other focus areas in research are biotechnology, renewable energy, health, internet technology and marine science and technology.

Human resource development and building capacity for S&T are primary goals:  At present, 87,000 students are enrolled at various levels in the ministry's educational institutions, out of a total of 300,000 students in higher education in all fields throughout the country. Students mostly favour the institutions under the Ministry of Health, followed by engineering institutes under the S&T Ministry. The latest available data (2002) on the number of researchers in Myanmar counts 837 full time equivalents (4,725 head count) (UNESCO 2016). Also due to the (now abolished) international sanctions, the Myanmar education system is little internationalised (with only a limited number of outgoing students, supported by government programmes). However, recent political activities show a growing interest in bringing this relativ isolation to an end. International cooperation with Europe is an important part of these strategies (e.g. on education cooperation).

Looking at indicators for competitiveness, Myanmar is still underperforming compared to its Southeast Asian neighbours. The World Economic Forum’s 2015-2016 Competitiveness Ranking sees Myanmar ranking 131st out of 140 examined countries. Myanmar’s ranking improved over the last few years (139th in 2013-2014 and 134th in 2014-2015). Myanmar was not indexed in the two previous Global competitiveness reports before. Myanmar is not indexed in the Global Entrepreneurship Monitor.

Myanmar’s performance in the Global Innovation Index is also moderate. The country ranks towards the end of the list of indexed countries – in the latest report Myanmar’s ranking is 138th out of 141 countries. In the year before the country ranked 140th. Myanmar was not covered in the reports from 2011-2013.

Science and technology policies are implemented by the Ministry of Science and Technology (MOST). Part of the tasks of Myanmar’s S&T-related ministries and agencies is managing and operating state-owned enterprises and organisations under them.

In regard to key S&T indicators for Myanmar, hardly any data is available. As depicted in the two tables below, some information is available on the growth of population, the GDP per year, number of publications, number of patent applications with domestic inventors and on areas of Foreign Direct Investment (FDI). Conversely, no recent data are available on different funds and sectors of R&D expenditure and human resources in R&D (researchers, R&D personnel etc.). The latest data accessible via UNESCO and World Bank for the missing indicators mentioned dates back to the year 2002.