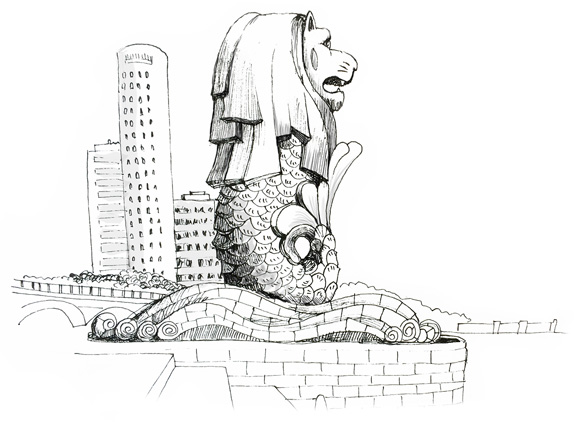 Singapore’s government views R&D as a driver for economic growth and as a foundation for the city state’s long term competitiveness. Over the last decades, R&D has been supported by the strong and sustained public investment. Representative of these efforts, public expenditure on R&D has consistently continued to increase over the last 10 years, reaching S$3.3 billion in 2014 or 0.8% of GDP. Firms also invest heavily in research and development with private sector expenditure at 1.3% of GDP and around 880 companies reporting R&D activity. The total R&D investment in 2014 (GERD) was S$ 8.5 billion (around € 5.7 billion) with an R&D intensity (GERD/GDP) of 2.2% (roughly stable since 2011 with 2.0% in 2013). (A*STAR 2014).

R&D expenditure in Singapore is channelled to key sectors, in which the country aims to develop a critical mass of research intensive industry and in which the greatest perceived potential for economic gain has been identified. The government takes Singapore’s national requirements into account, especially the country’s lack of natural resources and its existing industry, when deciding on the sectors in which the investment on R&D should be focused. R&D development plans are closely linked to Singapore’s industrial development plans and to date, the city state has been adept at levering off its historical manufacturing strengths to move up the value chain from labour intensive to innovation and knowledge intensive production. (Degelsegger &Sukprasertchai 2014).

The targets and the budget for the STI policy in Singapore are outlined in the Research, Innovation and Enterprise (RIE) Plan. The RIE is updated every 5 years, with the RIE 2015-2019 currently in place.

Alongside the more long standing goals of attracting and nurturing talent and promoting innovation, the prior RIE 2011-2015 already placed great emphasis on technology commercialisation to recoup some of the cost of R&D by encouraging public-private R&D partnerships and establishment of technology transfer offices and enterprise incubators (OECD 2013 op cit; Teh 2010). The RIE Plan 2020 defines four major thrusts:

and in three cross-cutting programmes: academic research, manpower, innovation and enterprise. S$ 2.5 billion are also reserved for so-called 'white space' funding, which can be prioritised at a later stage (NRF 2016).

The investments in R&D are complemented by policies to develop human capital and scientific infrastructure. Singapore has had sustained emphasis on building human resource competencies and Singapore has a well-developed tertiary education system. In addition, the Singapore government has actively attracted several leading universities to operate branch campuses in Singapore. Another key aspect of Singapore’s competence-building policy is its policy towards attracting foreign talent. To supplement the local supply of skilled labour, the government has consistently adopted a liberal immigration policy to attract overseas skills.(Degelsegger &Sukprasertchai 2014).

The degree to which R&D is considered a core policy area in Singapore’s governance system becomes visible in the Research, Innovation and Enterprise Council (RIEC), chaired by the Prime Minister. The RIEC decides on the overarching R&D strategy and national funding envelope. The RIEC advises the cabined of Singapore on national innovation policies and strategies and aims at strengthening coordination of different programmes and initiatives by different ministries and agencies.

In parallel to the establishment of the RIEC, the National Research Foundation (NRF) was also set up in 2006 under the PM’s Office to support the Council. NRF is responsible for the implementation and support of Singapore’s R&D strategy set by the RIEC and overseeing national R&D activities. The National Research Foundation allocates its budget through combination of top-down and bottom-up instruments supporting institutes of higher learning and public research institutes in their research and innovation endeavours. The National Research Foundation implements top-down Strategic Research Programmes in biomedical sciences, environment and water technologies and interactive & digital media as well as the National Innovation Challenge focusing on complex national challenges whose solution helps Singapore in the establishment of new industries. NRF’s bottom-up programmes include the Competitive Research Programme, a funding scheme, which fosters the formation of multi-disciplinary cutting-edge research teams, or the Research Centres of Excellence: long-term investments to create world-class research centres in Singaporean universities.

S&T policy in Singapore is not formulated in isolation, but as an integral part of a larger economic development strategy. Correspondingly, Singapore does not have a separate Ministry of Science and Technology but instead these policy-making and implementation functions have been subsumed by the ministries involved in economic development, particularly the Ministry of Trade and Industry (MTI), which is responsible for co-ordinating science and technology policies and formulating key economic policies for the country, in addition the Ministry of Information, Communications and the Arts and Ministry of Education.

The main statutory boards under MTI implementing STI policies are Economic Development Board (EDB), the Agency for Science, Technology and Research (A*STAR) and SPRING Singapore.

Besides around 700 national and multinational companies reporting R&D activity (investment) in 2011(A*STAR 2012)., the major public research performers can roughly be grouped in institutions of higher learning (IHLs), A*STAR institutes and other public research institutes.

A*STAR is not only a major research funder but also a major research performer. It currently comprises 18 research institutes and consortia; 10 grouped and financed under the Biomedical Research Council (BMRC), and 8 under the Science & Engineering Council (SERC):

Alongside these public entities, the private sector has a prominent role in the NIS of Singapore. In 2012, around 700 national companies and multinational companies reported R&D activity. Firms invest in research and development mainly in the areas of electronics, information and communication technologies and media, precision and transport, biomedical sciences and chemicals.

A growing number of researchers and engineers are behind the research outputs. In 2014, 32,835 research scientists and engineers (RSEs; head count; excl. graduate students) worked in Singapore (against 29,482 in 2011 and 28,296 in 2010), out of which 10,151 (31%) were foreign non-permanent resident RSEs. The researcher full-time equivalents (including all research personnel) were 42,542 in 2012, which equates to a researcher intensity of around 12 researchers per 1,000 labour force.