A special session on the topic of metrology (science of measurement) during the ASEAN-EU STI Days had been carried out on 22 Jan 2014. High level speakers gave presentations on the latest trends of metrology in Southeast Asia (SEA) and Europe.

Speakers and their Talks:

Prayoon Shiowattana, Director of the National Institute of Metrology Thailand (NIMT), Ministry of Science and Technology gave a presentation on metrology activities and new demands from metrology in Thailand as well as in Southeast Asia.

Kamal Hossain, EURAMET Chairperson and Director of NPL-UK, made a keynote speech on “Metrology – An Overview” and also in “European Research Programmes in Metrology:  EMRP & EMPIR”. He described the role of metrology in science & technology, technology diffusion & innovation as well as in our daily life including barriers to trade, environment and health issues. He also illustrated how metrology and metrology institutes improve the competitiveness of the organisations and companies in the country by giving concrete examples and presenting research studies. 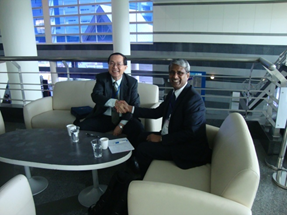 Meeting of EURAMET Chairperson, Kamal Hossain and Director of NIMT, Prayoon Shiowattana, prior to metrology session.

Tanfer Yandayan, Chief Researcher at TUBITAK UME, gave a presentation on “cooperative metrology activities in the SEA-EU-NET projects” describing the activities carried out since 2008 and further activities planned for 2014-2016. 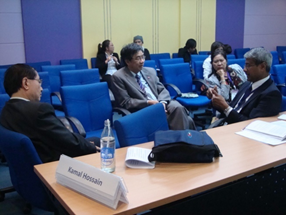 Finally, Tanfer Yandayan and Kamal Hossain answered questions on the participation of SEA researchers in EMRP/EMPIR from the audience and outlined possibilities of further cooperation between SEA and the EU, considering the establishment of quality infrastructure for “free trade of goods in ASEAN member countries” as well as the establishment of a new Regional Metrology Organisation (RMO) in SEA.

The aim of the metrology session was to bring researchers and key people in metrology together, outline metrology activities in Europe and Southeast Asia, emphasise new demands from metrology and define further steps to improve the cooperation activities using funding programmes.

The presentations by the Director of NIMT and the EURAMET Chairperson indicated that common research areas exist in metrology with common goals for both regions. It is also important to note that plans for the establishment of a new SEA Regional Metrology Organisation (like EURAMET in Europe) for further integration of SEA countries particularly for free movement of goods is another common area for both regions.

Key administrators and researchers have been informed about the progress of Metrology Activities in the SEA-EU-NET projects since 2008 with the planned next steps in 2014-2016. Scenarios for the participation of SEA organisations and SEA researchers in European Metrology Research Programmes (EMRP and EMPIR) were presented with a collaboration example (in one of EMRP projects) that is in progress.

Funding opportunities were also presented and extensive information had been given to the audience with possible scenarios of participation. 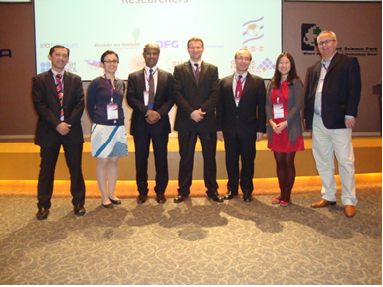 Copies of the presentations from the metrology session are available at STI website (www.stidays.net) in workshop archive. Direct link: http://www.stidays.net/?page_id=253

Link to the full report on the Metrology session at the STI Days 2014.